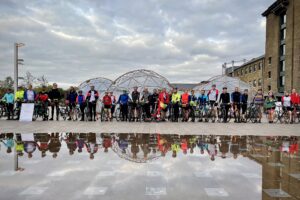 Around the world, doctors are cycling for clean air

Around the world, doctors are cycling for clean air As the International Day of Clean Air approaches, healthcare professionals from around the world have joined the campaign for clean air and blue skies. Doctors and other healthcare providers are organising a series of cycle rides in the run up to COP27, to make the links between the health crisis and the climate crisis and to demand governments do more to tackle air pollution. Tony Waterson, a 78-year-old retired paediatrician in the UK, is particularly concerned about air pollution, pointing out the risk to child and adult health. “The damage to children from air pollution is particularly serious, as their lungs are at a more vulnerable stage”, he said, “Air pollution was recently named as a cause of death for the first time in the UK, in the tragic case of nine-year-old asthmatic Ella Kissi-Debrah.” Determined to take action, Tony joined a fledgling campaign named Ride for their Lives. Last year, alongside hundreds of other healthcare providers, he took part in cycle rides across the country. “It’s really rewarding and inspiring to be on a ride like this”, he said at the time. “If we’re going to reach net zero, this involves everybody.” The Ride for their Lives campaign – a grassroots alliance of healthcare professionals and providers from around the world – are now hoping to organise hundreds of rides before the next UN Conference on Climate Change. The doctors are championing the Healthy Climate Prescription letter, which points out that air pollution is already causing more than nine million premature deaths every year and calls on nations to deliver a rapid and just transition away from fossil fuels. The letter is signed by over 300 medical organisations from across the globe. Lucy Abbey, a nurse involved in the campaign, had up until recently not ridden a bike since childhood. “I was a bit nervous about it and didn’t have time to train”, she said, “but once you read the science and you’re armed with that information you can’t really ignore it”. Since the ride, Lucy has tried to affect change in her workplace and to alter her own habits, but she points out that change has to also come from governments. “We are all part of the problem, but we can also be a part of the solution”, she said. In bringing healthcare providers together from around the world, the group is hoping to create a global network of climate-conscious healthcare professionals. Rides are already being planned in Italy, France, Chile, the UK and the US. Their recent campaign was launched earlier this year at the World Health Organisation's "Global Walk the Talk" event in Geneva. It was announced by Dr Mark Hayden, a paediatric consultant at Great Ormond Street Hospital, and Dr Heather Lambert, a retired paediatrician. The two doctors cycled 800km from London to Geneva for the launch where they were greeted by Dr Tedros Adhanom Ghebreyesus, the Director-General of the World Health Organisation. Dr Mark Hayden called on all healthcare providers to get involved with the campaign. “My job isn’t just to deal with what is in front of my eyes at work”, he said. “I didn’t do paediatrics to be that blinkered. My job is to do everything in my power to protect the planet for my patients.” His fellow campaigner Dr Heather Lambert stresses the importance of the International Day of Clean Air. " We have a moral responsibility to stand up for children and the environment”, she said after her ride. “Air pollution and climate change are the biggest health threat our children face”. Rides are still being planned for the Ride for their Lives 2022. If you are a healthcare provider or professional and want to get involved, you can find out more here. You can join here. The campaign is hoping to organise as many rides in the run up to COP27 as possible.